The Myth of Crime Displacement

This post addresses the myth of crime displacement, which simply describes the expectation that crime moves from one area to another due to police prevention efforts.

Some might think that if law enforcement’s crime prevention efforts are helping to deter crime in one area, that criminals will commit those crimes elsewhere. The research shows otherwise. When data-driven patrol takes away crime opportunities, most offenders opt to not commit the crime. Studies on criminology show that criminals often offend in the places where they are most comfortable. If there is repeated police deterrence, it reduces their willingness to offend in that location. They weigh the options and much of the time, will not relocate or think of the opportunities in another location as good. Several other criminology studies disprove displacement theory – many dating as far back as 1993.

What the Research Shows About Crime Displacement

A recent, National Institute of Justice study stated that, “quantitative measures offer strong support for prior studies that show that focused crime prevention efforts are not likely to have large displacement effects to areas nearby. In this sense, crime does not seem to simply “move around the corner” as a result of hot spot policing efforts.”

Using data about where and when crimes have been committed in the past, PredPol provides patrol officers predictions that give them the best chance of denying opportunities for future crimes to occur, shift by shift.

PredPol’s most recent study was conducted by the Atlanta Police Foundation after a predictive policing trial in 2013. Atlanta was broken up into six different policing ‘Zones’ and different Part 1 crime types were used to measure PredPol’s predictive accuracy, crime reduction results, and effects on crime displacement.

These charts show the average percentage of burglary & robbery crime within x distance from a PredPol box. The first rows display the 4 zones that were not deploying PredPol during the trial. The second rows display the 2 zones where PredPol was deployed:
[one_half_section] 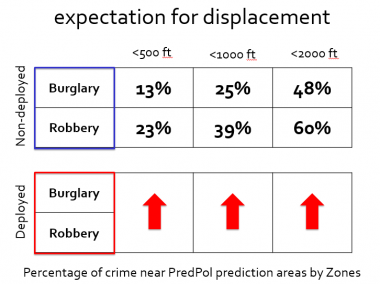 According to crime displacement theory, crime within x distance from a PredPol box in the 2 zones where PredPol is deployed should be higher than in the non-deployed zones, because PredPol is shifting crime “around the corner”.

Results actually show that, around PredPol boxes, crimes did reduce and were not displaced. The foundation’s researchers confirmed that “Utilizing PredPol did not necessarily change the location of crime compared to other zones”.

After the trial period, the foundation’s six researchers concluded that PredPol reduced crime in zones that were deployed, and the “hypothesized change in crime location did not occur“.

Back in 2006, UCLA researchers created a mathematical computer simulation model of crime pattern formation. The model led them to identify two types of crime hot spots that react differently to increased policing – one that relocates and another that dissolves. The model revealed that when given additional policing, super-critical hot spots displace and form in adjacent regions because they’re developed from small crime spikes. “You can’t just go and suppress all those small spikes in crime; you’re going to suppress the big hot spot,” Brantingham said. “The small spikes in crime that are out there in the environment are ready to nucleate into a new one.” However, the larger, subcritical hot spots do not re-emerge after increased policing.